A CPU cooler is a vital part of a PC build. The CPU cooler ensures that your processor is running smoothly without overheating. In today’s digital age, people from various walks of life utilize desktop computers to complete their respective tasks.

Some of these tasks are processor-intensive which use a good chunk of processing power. Carrying out these tasks results in overheating of the processor.

Thus, a good CPU cooler is a must-have PC component. A processor can become extremely hot while playing games in maxed-out resolution. When the processor overheats, it reduces the life of the processor. The processor’s performance is also affected by overheating, which may damage it in the long run!

Aftermarket CPU coolers are highly effective, but they come at a price. Most aftermarket coolers are expensive, predominantly liquid CPU coolers. Nevertheless, there’s a wide range of options available to choose from that won’t burn a hole in your pocket. In this article, I will be reviewing the Top CPU Coolers under $50 bucks.

Cooler Master Hyper 212 Evo is a single-fan CPU cooler. It comes with a heatsink that provides optimal cooling throughout the year. The heat sink is ventilated with a fin array structure to decrease the heat buildup. Additionally, it has four copper heat pipes for the accelerated surface to surface heat transfer. To put it in simple terms, your processor will cool much faster!

The Hyper 212 Evo CPU cooler has a compact design. It can be easily installed in a modern PC cabinet. The CPU cooler features a black aluminum surface that absorbs and dissipates heat. The RGB lighting on the cooler makes it an attractive choice for gamers as well as aesthetics enthusiasts. The power consumption is only 2.64W which is quite a shocker. The Hyper 212 Evo is undoubtedly one of the best CPU coolers under 50 dollars.

Hyper 212 Evo is a single-fan CPU cooler with a fan speed of 600 – 2000 RPM. The fan speed is perfect for carrying out high-intensive processing tasks without overheating the processor. The quiet 120mm fan provides the best cooling without producing any noise! Installing the CPU cooler can be pretty tricky if you haven’t done it before. However, as long as you follow the instructions manual, there shouldn’t be a problem. 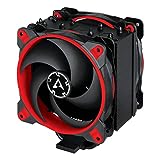 Arctic Freezer 34 is one of the highly recommended CPU coolers for gamers on a tight budget. The CPU cooler costs around $50 which is relatively inexpensive for the number of features it offers.

It would be hard to determine the winner if we outright compare the Cooler Master Hyper 212 Evo with this CPU cooler. This cooler does not lag in any way. In our tests, the Arctic Freezer 34 performed slightly inferior. Thus it is placed second in this list.

The Arctic Freezer 34 is a dual-fan CPU cooler. It comes with a heat sink for effective heat transfer. The heat sink has 4-heat pipes that are in direct contact with the CPU for improved cooling.

The cooler features a Fluid Dynamic Bearing, which is arranged to improve airflow and cooling efficiency. In addition to that, the heat sink and heat pipes feature a black thermal coating which results in optimal heat dissipation, hastening the cooling process.

Arctic Freezer 34 features a compact design. The cooler can easily install in small PC cabinets. Due to the cooler’s compact size, there is more than enough space for RAM and other components. The installation process is straightforward, requiring only a few steps to get it up and run. The dual 120mm fans deliver a 200 – 2100 RPM range that provides maximum cooling efficiency.

The dual fans have improved airflow when paired with the Fluid Dynamic Bearing while quickly dissipating the heat buildup. The only downside of this cooler is that it gets pretty noisy when running at 2100 RPM. Other than that, it’s an excellent choice for gamers.

The Arctic Freezer 34 is an ideal choice for high-end CPU processors. The CPU cooler puts forth an outstanding performance that comes at an affordable price point. By considering all the pros and cons, I recommend this cooler!

Cryorig H7 is one of the most affordable aftermarket CPU coolers. Cryorig is not as famous as Cooler Master or Arctic. However, it does produce some high-end CPU coolers. This section has the Cryorig H7 CPU cooler, which delivers phenomenal performance in the $50 price segment.

It is compatible with Intel and AMD sockets. The cooler is designed to work with both powerful chipsets. The CPU cooler comes with a 120 mm fan which provides optimum airflow to the processor. The fan speed of this cooler can be controlled in the 330 – 1600 RPM range. The cooler is noiseless even while running at 1600 RPM.

The Cryorig H7 comes with proprietary features that enhance the cooling efficiency of this cooler. The cooler is equipped with the proprietary Hive Fin System that provides airflow optimization and turbulence reduction. Also, the Fin Acceleration System ensures the cooler remains quiet at all times.

The cooler has an additional heat dissipation location and structural support that makes it quite durable. To maximize cooling efficiency, the heat sink is equipped with 3 Pure Copper heat pipes. The copper heat pipes are laid out efficiently to maximize the displacement of thermal energy.

Cryorig H7 has a quad air inlet for increased air inflow. The fan is quiet yet powerful when maxed out at 1600 RPM. It is an affordable CPU cooler that is suitable for both small and big PC cabinets.

The $50 price tag makes it an ideal choice for people on a tight budget but also need exceptional performance. I highly recommend this CPU cooler for anyone who wants a noise-free experience. 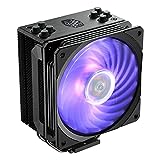 The next item on our list is the Cooler Master Hyper 212 Black Edition CPU cooler. It is one of the most popular and highly sought-after CPU coolers. The CPU cooler provides superb features worth every buck. It beats almost all CPU coolers in terms of performance and durability.

Honestly, the Hyper 212 Black Edition is an improved version of the Cooler Master Hyper 212 Evo model. The CPU cooler comes packed with exciting new features that give it an edge over its predecessor.

The Hyper 212 Black Edition comes with a new fan and assembly installation system. The design of this cooler is aesthetically pleasing. It features an aluminum top cover and nickel-plated jet black fins, which gives a premium appeal.

The jet black design looks good to the eyes, but it also helps increase the cooling performance. The cooler has an RGB feature which is fully customizable. The RGB lighting can be fully customized by utilizing the Motherboard RGB software or the controller attached to the cooler.

The CPU cooler comes with a 120mm fan with a speed of 650 – 2000 RPM. The fan is noiseless and provides airflow up to 57.3 CFM (Max). The CPU cooler has a stacked fin array which ensures the least airflow resistance, thus allowing more excellent airflow into the heat sink.

The Hyper 212 Black Edition CPU cooler is extremely easy to install in ATX and non-ATX cases. In this new cooler, you get an improved universal mounting bracket that ensures easy and hassle-free installation. The universal mounting kit is shipped in the box with the cooler.

The CPU cooler reduces airflow resistance, reduces heat spots and increases airflow to the heat sinks resulting in maximum cooling efficiency. I would highly recommend this cooler if you are on a budget and are looking for a compact, noiseless CPU cooler.

In terms of design, the cooler has a rugged and sturdy look. The slim 120mm fan sits atop the heatsink, which provides excellent airflow. The tiny tower size of 158mm makes it easy to install this cooler on most ATX and micro-ATX motherboards.

The Noctua NH-U12S Redux CPU cooler is an ideal choice for people who prefer noiseless and quiet fans. The cooler is pretty easy to install using the fan clips and anti-vibration pads. Additionally, by ordering the optional NA-FK1 fan kit, you can upgrade this cooler. The second fan will provide even better performance and enhance cooling efficiency.

We have now reached the final item on our best CPU coolers under 50 dollars list. The be quiet! Pure Rock 2 CPU cooler is an excellent choice in the high-quality budget CPU coolers segment. The cooler is noiseless and offers high cooling performance. It is indeed capable of keeping your processor temperature in check under a high processing load.

The cooler features an all-black design that is aesthetically pleasing. It is highly suitable for entry-level systems as well as high-end gaming systems. The Pure Rock 2 cooler is equipped with four 6mm heat pipes that contact the processor for optimal cooling.

The heat pipes have aluminum caps which make them quite durable. Coupled with this cooler’s 150W TDP and cooling fins, the all-black design helps in heat dissipation. The 120mm PWM fan operates silently even at 1500 RPM while providing maximum cooling performance. The blades of the fan are modified as well. They are airflow-optimized to reduce noise-generating turbulence, which results in only 26 dB noise at 100% PWM function.

The Pure Rock 2 is a highly well-designed CPU cooler. It can effectively cool down Intel Core i7 / i5 / i3 and AMD Ryzen 5 / Ryzen 3 processors. Even if you overclock the processor, the cooler will provide optimal cooling. The build of this CPU cooler is 100% RAM compatible. It does not block the RAM slots and saves space.

The cooler is easy to install in compact ATX and micro-ATX cabinets. The mounting plate is provided in the box with the CPU cooler that you can use to mount the cooler on Intel and AMD chipsets. Overall, the Pure Rock 2 is the best choice for you if you want a good-looking cooler and offers excellent performance. The $50 price tag of this cooler is worth every penny!

How to select Best CPU Cooler for Intel & AMD Processors?

In order to help you choose a budget-friendly CPU cooler, I have prepared a list of the best aftermarket coolers. The list features some of the highly-popular and most sought-after CPU coolers. Before we move on to the list, I would like to enlighten you with a few things that will help you pick the right CPU cooler!

An aftermarket CPU cooler is a must-have component in every PC builder’s arsenal. Be it overclocking or high-end gaming, an excellent cooler allows you to spend your time without worries. Say goodbye to the days when you would constantly monitor your processor temperature by purchasing a CPU cooler.

I hope you will find a decent pick for your needs in the list of CPU coolers under 50 dollars list that I shared. The coolers are basically dirt-cheap and offer phenomenal performance. They can be easily mounted on Intel and AMD processors.

If you are a hardcore gamer or an overclocker, I highly recommend you purchase a CPU Cooler before you wreck your processor by overheating. A CPU cooler will elongate the life of your processor, as well as keep you worry-free! Let us know about your experience by sharing it in the comment’s section below.


Hi, My name is Bhuvnesh Uniyal and I want to share everything I know about Technology, different Gadgets, PCs, Gaming, and more to help you in stucking situations. I grew up with tech, gadgets, and gaming and also finished my engineering recently. I also have few friends to share their knowledge on this blog.

Read More About Us >>